As today is January 1st, I pay my annual homage to those innocent black men, women and children who were killed during the first week of January in 1923 by angry white mobs in Rosewood, Florida.

Rosewood, a rural township located in Levy County near Gainesville, was a thriving and self-contained black community. Many of the black men in the area worked in the lumber industry chopping wood or extracting turpentine, while many black women served as domestic workers for nearby white families.

The Rosewood Massacre, like many others across the South and Midwest, was the result of white males savagely killing blacks based upon the lies of a white woman claiming to have been raped by a black man. In this particular instance, Fannie Taylor, a 22-year-old married white woman, reportedly was involved in an affair with a white male who beat her bloody after a dalliance. Fearing what her husband John Taylor, a white lumber worker, would do, Taylor concocted a lie that would lead to mass murder. 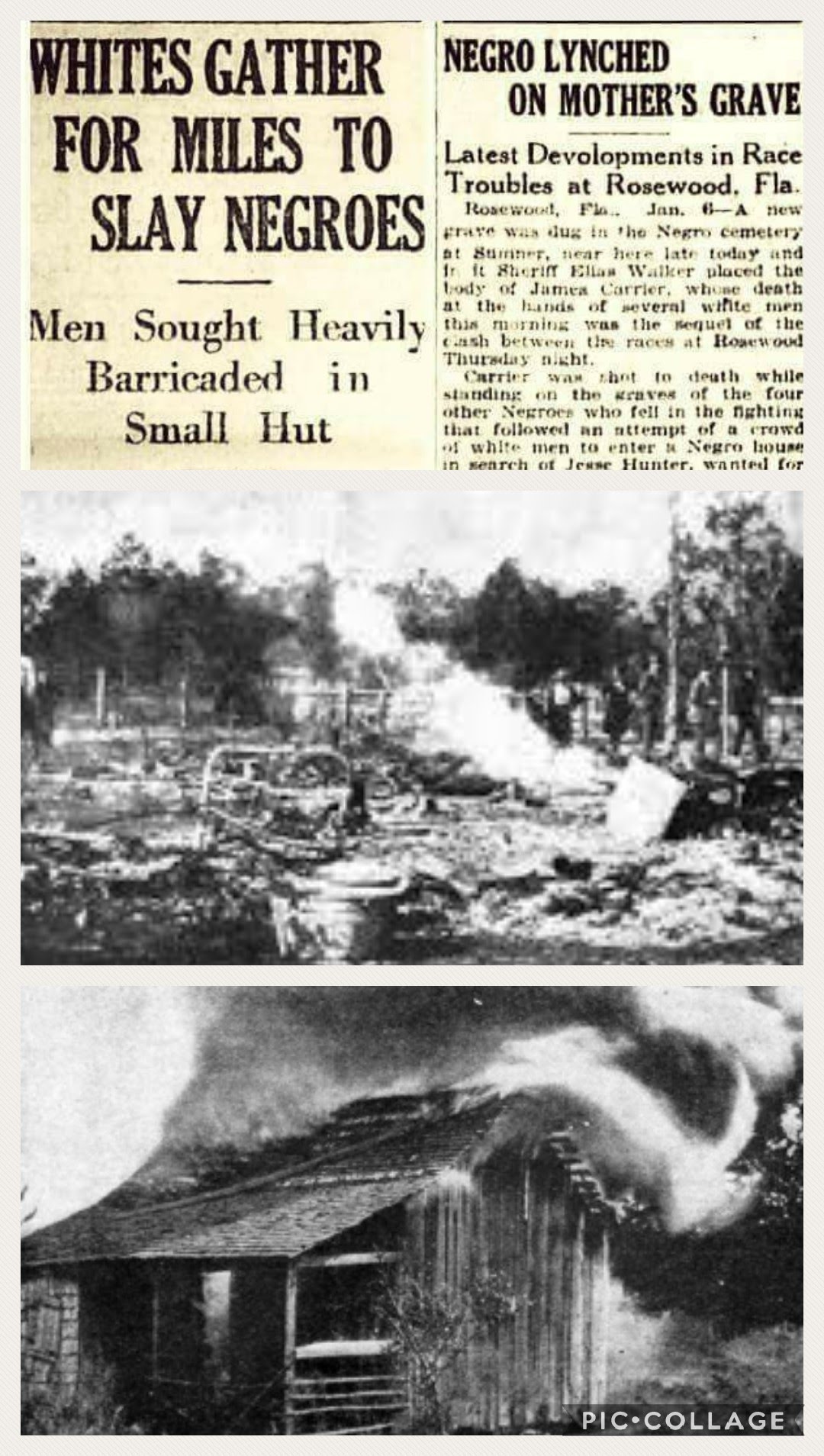 (Headlines and actual pictures from the Rosewood Massacre)

Based upon Taylor’s lies, the white mobs grew as the malevolent minions soon shot, hanged and burned blacks who had the misfortune of not fleeing.  In the span of one week, Rosewood ceased to exist; when the State of Florida compensated Rosewood victims in the mid-90s, the death toll was estimated at fewer than 10, but eyewitness accounts at the time–covered differently by white owned media and black owned media–estimated the white mobs in the hundreds and the death toll at anywhere from 26 to 150 victims. The white media, including the Associated Press and regional newspapers like the Miami Herald and Florida Times-Union, purveyed lies or “fake news” by calling the events in Rosewood a “Race War,” or by initially focusing on “Armed Black Mobs,” as if those black men who chose to defend themselves were the cause–as opposed to the effect–of white lynch mob violence. According to historian Thomas Dye, “(T)he idea that blacks in Rosewood had taken up arms against the white race was unthinkable in the Deep South.”

As the embers slowly burned out in Rosewood, by the end of the first week of January 1923, every single black home and business was razed to the ground. And while the State of Florida did provide some compensation seven full decades later, the property that was owned by blacks was soon sold off by the local government to white families. Property, mind you, that was never returned to its rightful black owners.